End of the Summer 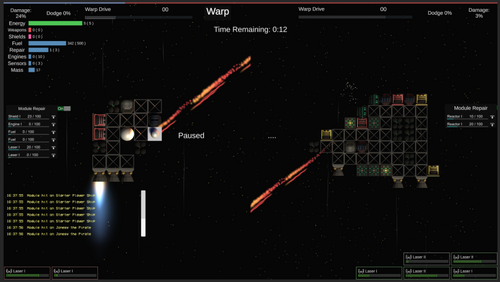 Well look at that? There's an update.  Don't get used to it. You've been warned.

Mostly I've been moving forward with the UI. Fixing a few things that have broken and trying to get a little better "game feel." Weapons can now be powered on and off with the keyboard and it feels SO much better. (Ha! No I won't tell you which keys. Tutorials are so 2005. Psh!) Not sure how I didn't figure that out on my own, but I never claimed to be bright just funny and good looking.  (Or was it good and...? Damn it.)  I'm working towards being able to "pre-load" or "pre-target" weapons before they're fully powered up. More stolen ideas.

After that I may play with weapons having multiple power up stages. So lasers that shoot twice can shoot once at half power or twice at full power... It's an interesting idea. Or maybe I'll save that for special weapons, but I should probably build it in anyways. Or maybe that's a waster of time. Or maybe I should stop arguing with myself and go to bed.